Although it is late in the season for finding Mantella frogs in Ranomafana, after a couple of hours of searching we found one. I say we but the hard work was all down to my guide Lova who knew exactly where to look. Mantella, even though brightly coloured, are hard to find as they tend to sit in refuges by streams and under leaf litter. The most reliable way to find them is by their call, a  short click noise, however they only tend to do this in the wet season when temperatures are higher so we just had to rely on Lova’s knowledge, a bit of luck and a couple of hours spent poking around in holes with a stick.

At only 2.5cm these are small frogs!

The most interesting thing about these small brightly coloured frogs is that they share such striking similarities with neotropical Dendrobatids or Poison Dart Frogs.  Although genetically unrelated, Mantella and some Dendrobatid frogs share many of the same features: toxic skin chemicals, terrestrial eggs, small body size, toothless jaws, a specialist diet composed largely of ants, active diurnal foraging, and aposematic (warning) coloration. All of which are considered to have evolved completely separately, a process called convergent evolution. 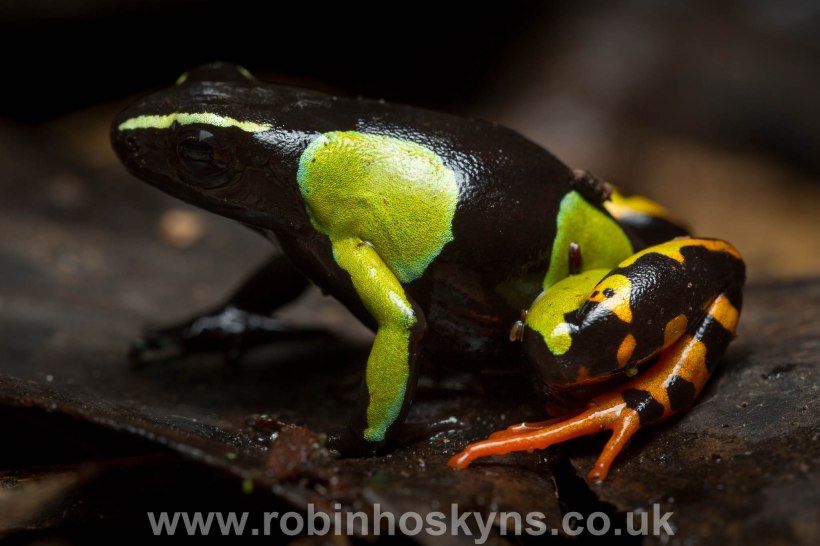 They also do not sit still making them very difficult to photograph!

Convergent evolution is defined as the process by which similar features evolve separately in species with separate lineages. In other words evolution creates animals with attributes that have a similar form or function that were not present in the last common ancestor of each species. These traits usually enable animals to fill very similar ecological niches.

In both Mantella and Dendrobatids, defensive chemicals appear to be closely associated with the evolution of aposematism (warning colouration) as a visual warning of their toxicity to potential predators, and active diurnal foraging, a behaviour that is generally rare in frogs.

M. baroni is very similar to M. madagascarensis however it lacks the red flash marks on the legs and horseshoe shape under the chin.

Although wild poison frogs retain toxic skin alkaloids for several years in captivity, they do not seem to be able to produce their own toxic alkaloids in fact they accumulate these toxins from their diet. Toxic alkaloids have been shown to be absent in Dendrobatid and Mantella frogs when raised in captivity on a diet of fruit flies however these individuals will readily accumulate alkaloids when added to their diet.

The foraging behaviour and diet of Mantella is not yet well documented relative to Dendrobatids however ants are known to dominate the diet of Mantella. A study conducted in Ranomafana National Park collected Mantellid frogs and arthropods with the potential to be sources of alkaloid chemicals. The study found that 13 of the 16 alkaloid compounds found in the arthropods of Ranomafana are also known in other ants, beetles, and frogs endemic to the neotropics and that 9 of the 12 alkaloids found in Mantella are also found in Dendrobatids.

Because ants are a common or even dominant part of poison frog diets the presence of suitable toxic alkaloids in ants may have been the essential requirement for the evolution of chemical defence in both Malagasy and Neotropical poison frogs. The finding that endemic Malagasy ants contain these toxic alkaloids is evidence to support convergent evolution. Furthermore the convergence seen between the two groups of frogs might itself have been driven by convergent evolution in the unrelated ant groups found in Madagascar and the Neotropics. 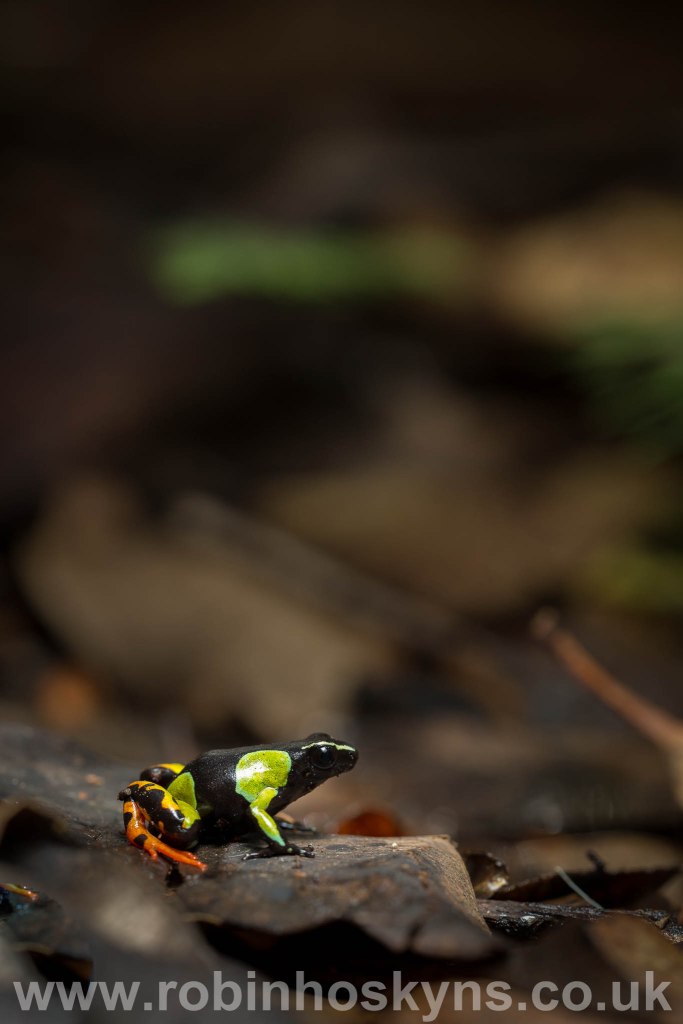