I recently returned from my second trip to Madagascar. It felt good to be back after spending six months there in 2015. Memories came flooding back and it didn’t take long to get back into the swing of Malagasy life.

Unfortunately this was a much shorter visit with the primary objective of shooting footage for my final film project as part of the MA in Wildlife Filmmaking at UWE.

I had planned the film based on the visit to Anja I wrote about in this blog post. Having got amazing images in just a couple of hours I knew that this would be an incredible location for a film, offering a relatively easy opportunity to get some great wildlife footage in a stunning location. Despite how cool the location and wildlife is the thing that convinced me that this was the place was the story of the reserve itself.

Even though it’s a great story, much of my planning before leaving was thinking about how to make the story into an interesting film. Conservation films are notoriously difficult to make as they can often leave the viewer feeling despondent or be too informational and not particularly interesting to watch for the average person.

The story of Anja is a positive one which means I have the chance to make an uplifting and inspiring film. The edit is still a work in progress so you will have to wait and see if I have achieved these high aims!

The shoot went well and it was amazing to be camping right on the edge of the forest, waking up to the sounds of the lemurs calling with the light starting to hit the cliffs that provide Anja’s epic backdrop.

Our guides were great and it was good to spend a good length of time in the location getting to know them and improving my Malagasy. Our cook kept us well fed with a selection of Malagasy dishes served with Malagasy sized portions of rice!

I didn’t have too much time for photos, it’s really difficult to manage shooting both stills and video simultaneously as it is a different mindset required for each, and for this trip filming was my priority! I did manage to get some images though and some were taken by my course mate, Ross who accompanied me on the shoot. Hopefully these give you a sense of what the shoot was like, enjoy! 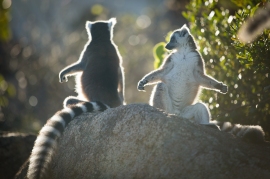 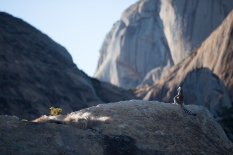 And here’s a couple of quick clips: